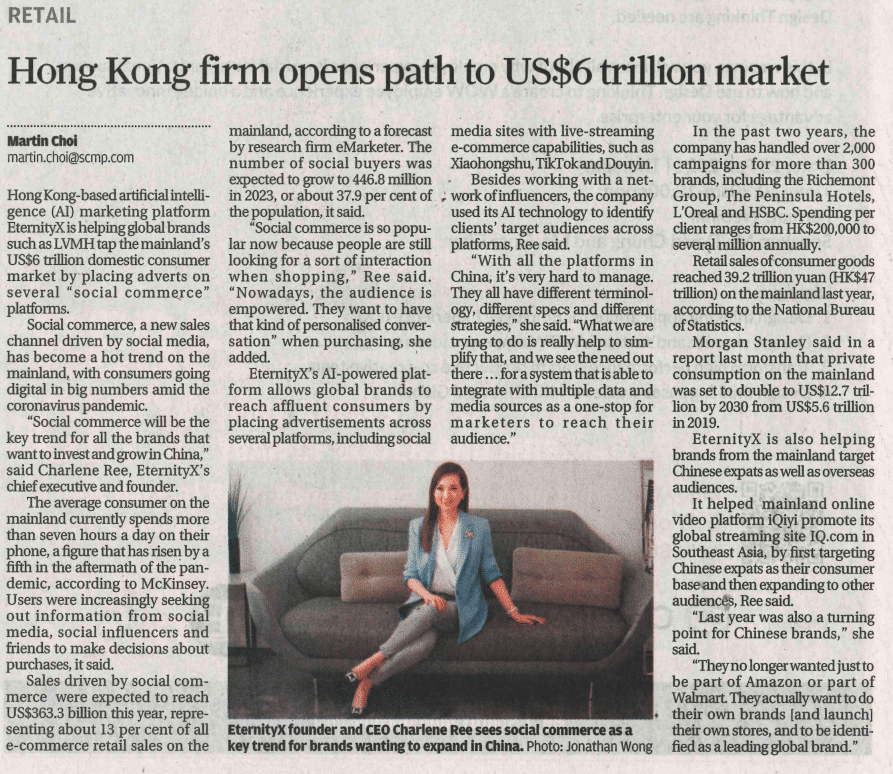 ” Social commerce will be the key trend for all the brands that want to invest and grow in China. “

Sales driven by social commerce were expected to reach US$363.3 billion this year, representing about 13 per cent of all e-commerce retail sales on the mainland, according to a forecast by research firm eMarketer.

At the same time, according to Mckinsey,the average consumer on the mainland currently spends more than seven hours a day on their phone, a figure that has risen by a fifth in a aftermath of the pandemic. Users were increasingly seeking out information from social media, social influencer, and friends to make decisions about purchases, it said.

Social commerce is so popular now because people are still looking for a sort of interaction when shopping.

Charlene said, “What we are trying to do is really help to simply that, and we see the need out there…for a system that is able to integrate with multiple data and media resources as a one-stop for marketers to reach their audience.”. She continued, “With all the platforms in China, it is very hard to manage. They all have different terminology, different specs and different strategies.

EternityX was founded in 2018, having global offices settled in Shanghai, Beijing, Australia and Singapore, expanding its business to Southeast Asia, such as Thailand, Vietnam, Japanese and Korea. In the past two years, the company has handled over 2000 campaigns for more than 300 brands, including the Richemont Group, the Peninsula Hotels, L’Oreal and HSBC.

Retails sales of consumer goods reached 39.2 trillion yuan (HK$ 47 trillion) on the mainland last year, according to the National Bureau of Statics. Meanwhile, Morgan Stanley said in a report last month that private consumption on the mainland was set to double to US$12.7 trillion by 2030 from US$5.6 trillion in 2019.

EternityX is also helping brands from the mainland target Chinese expats as well as overseas audiences. It helped the mainland online video platform iQiyi promote its global streaming site IQ.com in Southeast China, by first targeting China expats as their consumers base and then expanding to other audiences, Charlene said.

“Last year was also a turnning point for Chinese brands. They no longer wanted just be part of Amazon or part of Walmart. They actually want to do their own brands [and launch] their own stores, and to be identified as a leading global brand.”